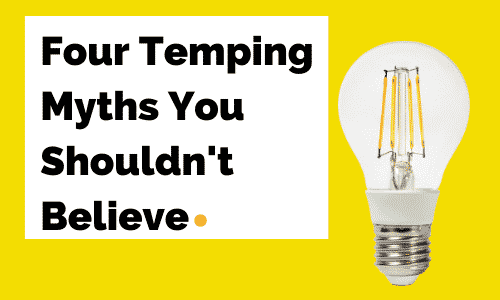 As a Candidate Resourcer, I’m lucky enough to get to spend time talking to candidates pretty much every day. But one thing that still confuses me is the amount of people who’ve got some pretty strange ideas on temporary working and the reasons why they would never consider taking a temp position.

From ‘you get paid far less than a permanent member of staff’ to ‘it is only for people with no skills’ I’ve heard them all so, let me dispel the myths.

You get paid less

Many employers pay their temporary workers the same amount from the start of their contracts to attract new workers to positions and reduce the amount of paperwork they need to do after the 12 week period.

Temporary working is for people with no skills

This isn’t true. I have several high achieving candidates who are currently in temporary positions and loving it! One of them is a Financial Controller with a great finance background and more qualifications than you could shake a stick at.

Many temporary workers come from skilled professions and temp because it suits their individual circumstances, and certainly not because they are lacking in the skills department.

If any agency tries to tell you that you need to pay either a percentage of your earnings to them during, or at the end of the contract then they are breaking the law. Likewise, no recruitment agency should request any form of payment from you for finding you the temporary position in the first place.

In the unlikely event that this should happen, refuse and report the matter to the Recruitment & Employment Confederation (REC) immediately.

You don’t get holiday pay

Temporary workers are entitled to paid annual leave the same as permanent employees. Temp workers and permanent staff alike accrue leave in exactly the same way and are entitled to take it as an when they wish, subject to approval from the employer.

Temp workers do not receive less paid leave than permanent staff as they are both calculated on hours / days worked.

There are so many benefits to temping, it offers the ability to try something new. The flexibility can give you a great route back into employment. So don’t believe these temping myths as temporary working could just offer the employment opportunity you’ve been looking for.

Contact us to find out if temping could be right for you.