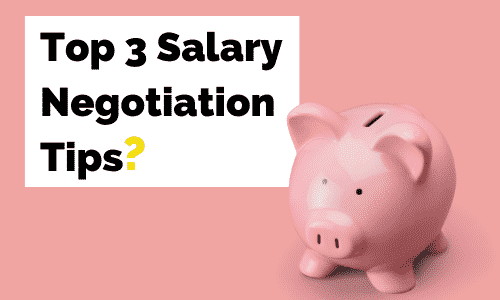 With many workers across Staffordshire and Cheshire thinking of asking for a pay rise as the cost of living increases, you’ll want to make sure that you give yourself the best opportunity to land an increase to your pay with some of our top salary negotiation tips.

Asking your boss to bump up your pay can be pretty nerve wracking, but if you go about it the right way you’ll significantly boost your chances of getting the salary you deserve.

Prove you’re worth it

Going in all guns blazing and demanding more money won’t get you very far. Employers seldom give pay increases just because they’ve been asked for one so the trick here is to prove why you’re worth the extra money.

Prepare a few examples of why you deserve a pay rise. Perhaps you’ve been part of a successful project, recently completed a new qualification or have taken on a much higher workload over the last few months.

Explain to your manager why you feel that these extra skills or responsibilities are essential to the success of the company and you’ll have created a solid foundation for salary negotiation.

Just because you’ve heard that someone else is earning far more money than you in a similar role doesn’t necessarily mean it’s true or realistic. Asking for a huge pay increase when you’re still in the same role will only leave you feeling disappointed and demotivated when your request for an unrealistic increase is turned down.

Take a look at similar roles in your local area and what salaries they command and any additional skills and experiences you bring to the business before putting too large a figure on the pay rise you’re going to ask for.

Not all salary negotiations go as we might have hoped, but this doesn’t mean you should give up or come to the conclusion that your pay packet will never get any bigger.

If you’ve been turned down for a salary increase, politely ask for a reason why this isn’t going to be possible at that point. It could be that you need to brush up on your skills, take on some training or a qualification or take on some additional responsibilities or work.

Using this information, you can plan your next move so that the next time you want to negotiate your pay you’ve got all the ammunition you need to make it happen.

For more salary negotiation tips or to find out how much you should be earning, speak to the Appointments team today. Get in touch on 01782 338787 for a chat.